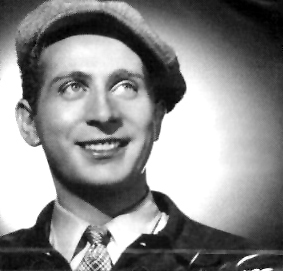 Charles Trenet (Louis Charles Auguste Claude Trenet) (18 May 1913 – 19 February 2001) was a French singer-songwriter. He was most famous for his recordings from the late 1930s until the mid-1950s, though his career continued through the 1990s. In an era in which it was unusual for singers to write their own material, Trenet wrote prolifically and declined to record any but his own songs Trenet's best-known songs include "Boum!", "La Mer", "Y'a d'la joie", "Que reste-t-il de nos amours?", "Ménilmontant" and "Douce France". His catalogue of songs is enormous, numbering close to a thousand. While many of his songs mined relatively conventional topics such as love, Paris, and nostalgia for his younger days, what set Trenet's songs apart were their personal, poetic, sometimes quite eccentric qualities, Some of his songs had unconventional subject matter, with whimsical imagery bordering on the surreal. "Y'a d'la joie" evokes joy through a series of disconnected images, including that of a subway car shooting out of its tunnel into the air, the Eiffel Tower crossing the street and a baker making excellent bread. The lovers engaged in a minuet in "Polka du Roi" reveal themselves at length to be "no longer human": they are made of wax and trapped in the Musée Grévin. Many of his hits from the 1930s and 1940s effectively combine the melodic and verbal nuances of French song with American swing rhythms. His song "La Mer", which according to legend he composed with Léo Chauliac on a train in 1943, was recorded in 1946. Trenet explained in an interview that he was told that "La Mer" was not swing enough to be a hit, and for this reason it sat in a drawer for three years before being recorded. "La Mer" is Trenet's best-known work outside the French-speaking world, with more than 400 recorded versions. The song was given unrelated English words and under the title "Beyond the Sea" (or sometimes "Sailing"), was a hit for Bobby Darin in the early 1960s, and George Benson in the mid-1980s. "Beyond the Sea" was used in the ending credits of Finding Nemo. His "Formidable" was written as impressions of a trip to America. "La Mer" has been used in many films such as Bernardo Bertolucci's 2003 The Dreamers, the 2010 German film Animals United, and in the closing scene of Mr Bean's Holiday. A Julio Iglesias version plays in the final scene of the 2011 spy film, Tinker Tailor Soldier Spy. The song was also used in the opening credits of the 2007 film, The Diving Bell and the Butterfly, which used the song to highlight the paralysing effects of a stroke that felled his fellow Frenchman, Jean-Dominique Bauby. Both Trenet songs "La Mer" and "Vous qui Passez sans me Voir" were featured prominently in Henry Jaglom's 1971 A Safe Place. It was also used as the opening title song in Steve Martin's L.A. Story in 1991. Other Trenet songs were recorded by such popular French singers as Maurice Chevalier, Jean Sablon and Fréhel.